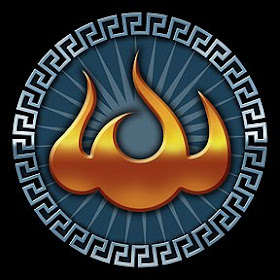 I've been learning about Stoicism recently. With graphic art and illustration my profession, I decided to make a Stoic Emblem. While it may seem a simple logo at first glance, I have imbedded many symbolic meanings within its form.

The general depiction is of the Primal Fire, or Logos - the Reason which governs the workings of the universe. The shape of the flame is based on three circles (see diagram at bottom of this post). The central circular flame represents the Divine Fire of the universe itself. The two circular clusters that spring off on the left or right side represent our individual minds (or souls), which are a part of the Divine Fire and spring forth from it.

There are four tips to the flame, representing each of the four elements in which Logos forms, according to the physics at the time of Stoicism's founding (fire, air, water, and earth).

The flame tips appear random at first glance but has been given an orderly structure. First, it's tips are at regular height intervals. From left to right, the first tip is the second tallest, the next is the shortest, the next is highest, and the last is third tallest. If you were to draw four horizontal lines at each tip, you would see that their heights are equally spaced. Secondly, each tip ends at the exact middle of the circular frame on which its lower portion was based. The reason for this is to symbolize the fact that, even in seemingly chaotic systems, there is an order and a Reason operating throughout.

The tips of the flame also point either left or right. There are two pointing left and an equal number pointing right. This symbolizes the balanced but opposing directions toward unity and division, order and chaos, which maintains the complex system that is the universe.

Behind the Fire are rays. These point both inward and outward, symbolizing the all pervasive nature of Logos in the universe. Finally, a circular border symbolizes the cyclical nature of the universe and the Greek key pattern represents the culture from which Stoicism was born. 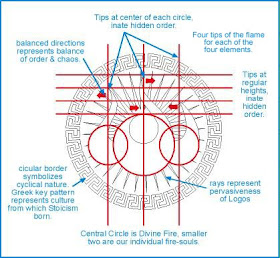 Below are some other versions of the logo, for use on a white background, greyscale, or plain black & white. Please feel free to use the Stoic Emblem in reference to Stoicism. All I ask is that it not be modified (apart from proportionate scaling). It would also be nice if credit and/or a link was provided. Groups and organizations are also free to use this emblem, including in media forms such as web and print, as long as they don't give the impression that it is an emblem only for their particular group and as long as they don't try to copyright it (according to U.S. law, I hold the copyright simply by creating it). If anyone would like larger or higher-resolution versions of any of these files, please contact me and I will be happy to provide it. 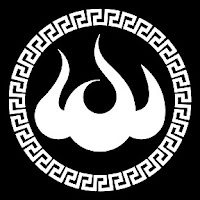 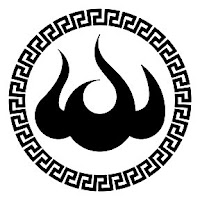 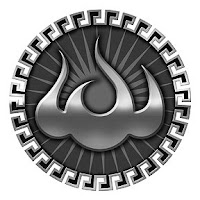 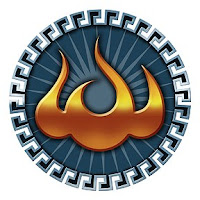 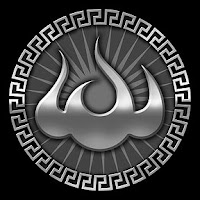 Update, July 2009:
This year I discovered that someone else has also been thinking of iconography for Stoicism. Erik Wiegardt, Director of New Stoa, has designed a symbol called the "Phenomenon of Existence" (POE), named after a phrase Epictetus used. It can be seen below. For a full explanation of the meaning of its components, you can visit NewStoa.com, see the Stoic Handbook, and toward the end there is a chapter called "Stoicism in 5 Minutes" which explains the elements in this image. There is also this video on YouTube. I created this fancy version of Erik's symbol in Photoshop... 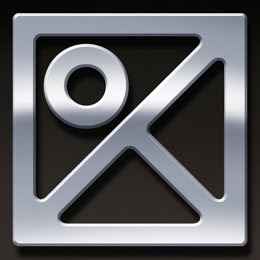 Update, December 15, 2009:
Since posting and sharing my Stoic Emblem design, this page has been one of the most popular from among my websites, and I have received numerous compliments and comments. Several people have requested high-resolution versions of the Emblem for use on their websites, book covers, and even one music band has asked to use it. There have been at least three individuals who have told me of their intention to get the Stoic Emblem as a tattoo. If anyone does this I would appreciate knowing about it and getting a picture. Today, a fellow named Matt sent me a pic of his tattoo, inspired by the design - thanks Matt!... 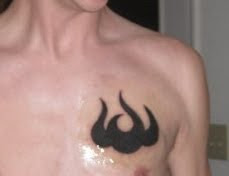 Another thing I've been meaning to add here, is an image of what this emblem might look like in a simplified, hand-drawn form, as suggested by commenter miniaras. If drawing it by hand, a person could get as close to the detailed version or as simple as desired, but I would think the key thing to include would be a flame with four points, and a circle, as below... 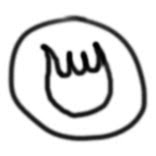 Update, December 19, 2009:
Another person named Tiffany has sent me a picture of her Stoic Emblem tattoo, which she has on her upper right arm. Thanks Tiffany! 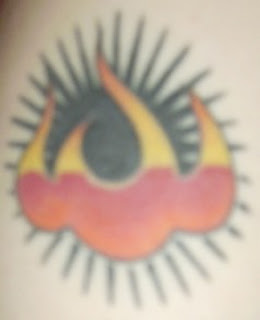 Update, August 3, 2010:
I wanted to share another symbol for Stoicism created by Michel Daw. Of the following symbol, Michel says this:

"Regarding my symbol. There are several element to it. It is, first and foremost, a representation of the Phi, the mathematical symbol for the golden ratio, where 'a+b' is to 'a' as 'a' is to 'b'. It is an irrational mathematical constant, approximately 1.61803398874989. Also know as the golden mean, the divine ratio etc. Biologists, artists, musicians, historians, architects, psychologists, and even mystics have pondered and debated the basis of its ubiquity and appeal. It is present in nature at a surprising level, appearing in the spirals of galaxies and of the humble nautilus shell. For me it is a constant reminder to live according to nature, and the rest of Stoic philosophy falls from that. The graph of phi in contained in the circle, which represents the universe and is superimposed by the the letter phi, which coincidentally is the first letter in the Greek word for nature, phusis." --Michel Daw 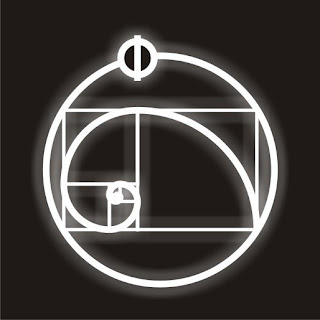 Update, March 15, 2012:
Matt (see above) has since added a circular area to his original tattoo with the wording from his favorite Marcus Aurelius quote... 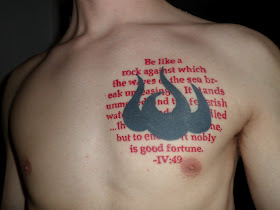 Update, April 5, 2012:
Another person named Ben has chosen to get a tattoo of the Stoic Emblem. Ben informs me, "The sunflower is from the phrase "there is nothing new under the sun" from the book of Ecclesiastes in the Old Testament, also, a translation of the Meditations of Marcus Aurelius [by George Long]." Thanks for sending this in Ben!... 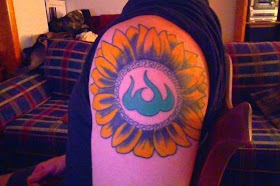 Update, June 6, 2012:
Matthew Zaucha sent in a picture of his recent tattoo of the Stoic Emblem. He says, "I have it blending out of my Flames of Passion tattoo on my arm to symbolize the taming of raw passion through stoicism.  I also changed the Greek border to an ouroboros to symbolize the infinity of the human psyche." Very creative! 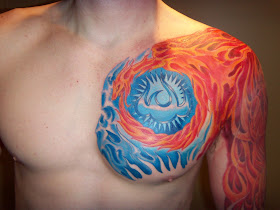